Tales of the teapot

Tales of the teapot 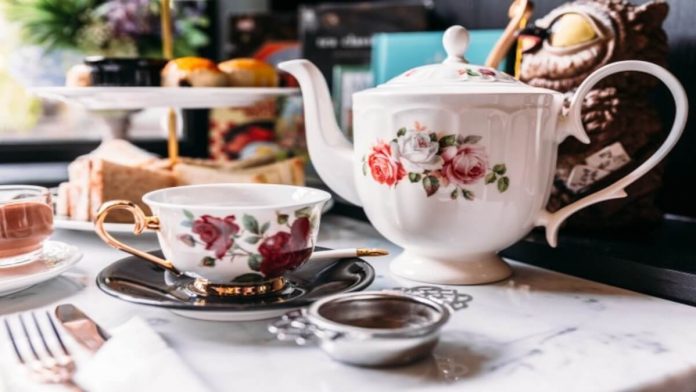 Sitting by the writing desk on a cold evening like this, when all you long is the warmth of affection to pour over you, it’s indeed a nice cup of steaming hot tea that lends you a solace like no other. Indeed, even when I did mention affection, I perhaps did not mean it as devotedly as the cuddles with a loved one as I did in reference to that immense jolt of emotions that the hot brew sends up through the body, right upto the soul, holding it in an embrace warmer than what could be brought about by even the tightest of hugs spewing even the most intense of feels. Call me paranoid but as someone who can live all her life on just tea, sustaining through a nice, rich cup of milky, sugary antidote to every woe of life, this divine concoction sparks a certain euphoria and joy and satisfaction that few other things in the world can lead me to.

But while the warm stirrings of the cuppa might be a particular craze on gloomy, rainy, insipid days, balancing the flavours of life with just the right dose of goodness, that makes for a guilty pleasure and a healthy indulgence all at once, the allure of tea is such that works its magic as significantly on perfectly beautiful days that the world is blessed enough to witness. Be it a sweltering hot day or a pretty spring evening, a romantic breezy moment or a stressed out experience of life, tea just about dissolves each of the worries that life might present itself in, lending you the warmth of its confines that warms you up or soothes you down, that rejuvenates you and has you feel charged up instantly, in a deliverance of positivi’tea’ that is really remarkable. And despite the many eloquences I have been waxing about of tea uptill this time, it isn’t tea particularly that I today intend to dwell upon. It rather is something even more characteris’tea’c of its brewing and s’tea’ping that today my whole roundup of tea is dedicated to.

As enticed as I am by the flavours of tea and the emotions emanating from it, it also is the tea brewing process that holds somewhat of a charm to me, or perhaps more accurately to every tea person as such. The tea leaves unfurling their gaiety as they swim about in the waters, coloring it in their shade of earthy richness, concocting up what indeed is a potion of sorts, is a dramatic vision to witness in itself, rendered all the more magical when the action takes place within the transparent confines of a glass teapot, the water simmering with the tea leaves in their splashes of vibrancy, taking its own sweet time to get imbued within the expanses of what would make for comforting pourings of cups of humble luxury. And it is wherein rests my object of attraction that I seek to explore for the day- the somewhat captivating shaping of the teapot that which is so exotic a matter of the entire tea experience even in its commonplace sophistication. Even when the teapot sounds so much like something that has been perhaps integral to the whole tea business ever since the beverage has been making its rounds through humans in history, the fact of the matter is that the teapot isn’t as ancient as the brew itself. The earliest known reference to the teapot can be traced also to the country where the brew had its origins, in China sometime in the BC period, but at a time much later, in fact centuries later during the Yuan dynasty. Notably though, teapot like structures in shapes very resemblant of the modern times had been in existence within China much before that though they were used for storage of other liquids like water and wine. It perhaps were from these very ceramic kettles and wine pots that teapots came to be, as vessels where tea would be prepared, diverting from the earlier method of brewing the leaves in cauldrons or other big bowls. A certain Yang Dynasty text Jiyuan Conghua is among the firsts to describe a teapot even as the oldest known teapot in the world dates some years forward to 1513, during the times of the Ming Dynasty. It was also corresponding to this latter time that teapots became even more widely used in China with the introduction of loose leaved teas over powdered ones.

The teapots of the time when they first emerged were however quite small in sizes, designed to brew a single serving of tea, especially since the Chinese used to indulge in their favorite beverage by directly drinking it out of the pot through the spout. A specific type of these small sized teapots from China came to be known as Yixing clay teapots or Yixing teapots, made from Yixing clay or local zisha, with a purple-red-brown colour, made in the province of Dingshu. Believed to have been handcrafted by a monk from Jinsha Temple (Golden Sand Temple) in Yixing during the reign of the Zhengde Emperor, Yixing teapots are most prominent in their use in tea brewing in the gongfu style, for a certain type of tea leaves. Also interesting is the flavour and color of the tea brewed in these teapots, that which absorb trace amounts of brewed tea flavors and minerals with each brewing, accumulating in the insides of the vessel and that which permeates in to future servings brewed in it. Somewhat sandy in texture, both in the look and feel of them, Yixing clay teapots also tends to take on a jade like appearance under the continuous effect of putting it over fires, rendering them therefore an aesthetic that is uniquely breathtaking as well.

Much like tea though that spread across to other parts of the world, the Chinese teapots also started making inroads into other countries. Most remarkable of them all perhaps is the kyusu, widely considered a traditional Japanese teapot primarily used for brewing green tea, even when its origins are rooted again in the Chinese empire and perhaps also in the Korean state of affairs of the past. Dating back to even earlier times than the Yixing teapot is the Kyusu, that originated sometime during the Song dynasty in China but had its growth and evolution in Japan after it was brought into the country by travelling Buddhist monks. A distinctive type of the teapot in having a side handle, the kyusu is traditionally made from high quality clay and often comes lined with a fine mesh strainer and is today a staple in almost all Japanese homes, where drinking green tea is a habit commonly indulged in by everyone.

The journey of the teapot outside of Asia began with its venturing into the European continent towards the end of the 17th century. Exported along with fine quality tea itself, these teapots were typically made from porcelain to help them withstand the long journey over sea waters, in fact so resistant were they against the ravages of the precarious trade route and the humid salty sea air that they were packed below the deck while the tea itself was stored above to keep it dry and fresh. Particularly desirable were these porcelain teapots in many European countries, partly because they themselves were not privy to the art of crafting such beauties. Whatever that might be, teapots not being a traditional element in the western world, they did not really evolve there into definite and distinctive types of their own. One exception though can be made of a certain teapot that is exclusive to England. These are Brown Betty teapots, a distinctive round shape, glazed with a manganese brown Rockingham glaze, that also came into being towards the fag end of the 1600s. Emerging as tall, coffee pots shaped structures, the Brown Betties took on their now iconic shape in the 19th century coinciding with the Victorian era when tea enjoyed its era of peak popularity in the country. Tea brewed in the Brown Betty was considered excellent, a supremacy attributed to its design, quite basic in essence but nevertheless standout in the flavour it imparted to the famed high teas of the British, not to mention the striking looks of the teapot itself, rendered by the glaze brushed on the pot and allowed to run down the sides, creating a streaky finish as it was fired. Another very English invention in terms of the teapot is equally remarkable. The cube teapot, as it is known, is exactly what it encompasses by virtue of its nomenclature, sitting in a cube shape so designed to make it suitable for use in ships during the course of sea journeys. Invented by Englishman Robert Crawford Johnson, this is a teapot without a spout or handle, and one which did not drip or roll over even in a ship cascading through the not so calm surface of the waters.

Not the same however can be said of other countries residing in the western sphere of the globe, in stark contrast to a couple of Middle Eastern countries, most notably Turkey. Famed for its unique tea culture as also its distinct variant of the Turkish tea, or cay, the country enjoys the distinction of being the largest consumer of the world’s favorite beverage, which it brews in an equally distinctive type of teapot. Turkish tea is prepared exclusively in a unique double teapot called “çaydanlık” and served also in interesting tulip shaped glasses called ince belli. The method of brewing tea in the çaydanlık makes also for an interesting procedure of the culinary, whereby water is brought to a boil in the larger lower teapot and then some of the water is used to fill the smaller teapot on top and steep (infuse) several spoons of loose tea leaves, producing a very strong tea with a very deep color, wherein lies the characteristic brilliance of the tea of this magical land. 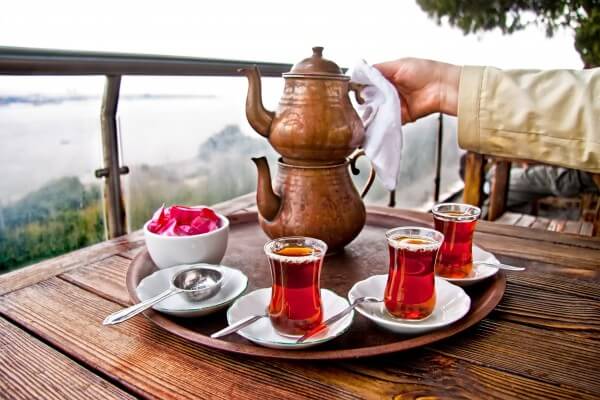 Another such unique teapot ranging from the eastern part of the world can be attributed to the countries of Lebanon and Syria. Called the Briq, Ibrik or Brik, this ancient tepot and pitcher has been in existence much before the teapot made its way through China and into the rest of the world. Today more of a cultural artifact in Lebanon, the briq was at one time used to directly drink tea from it by multiple persons without the lips touching the spout.

Furthering the British lineage of teapots is another country not rooted in the west, that of the African land of Morocco. Famous for its mint tea, the Maghrebi mint tea, the mystic of Morocco sure unfurls even through the many apparatus used in its traditional tea ceremonies. Drunk out of ornate, jewel-colored tea glasses called keesan, Moroccan tea is traditionally prepared in the round-bellied metal or cast iron teapot called a berrad. Distinctive in its cone-shaped top, the berrad is used to brew tea by placing it over hot coals, the concoction then being poured from quite a height, as part ritual, part purpose. Handcrafted from silver and carrying a stamp of authenticity at the bottom of the teapot, the berrad is an essential element of the Moroccan kitchenware, specifically of its elaborate tea preparations, not surprising for a region that is among the 10 most tea consuming countries in the world.